Buy the complete series as One: 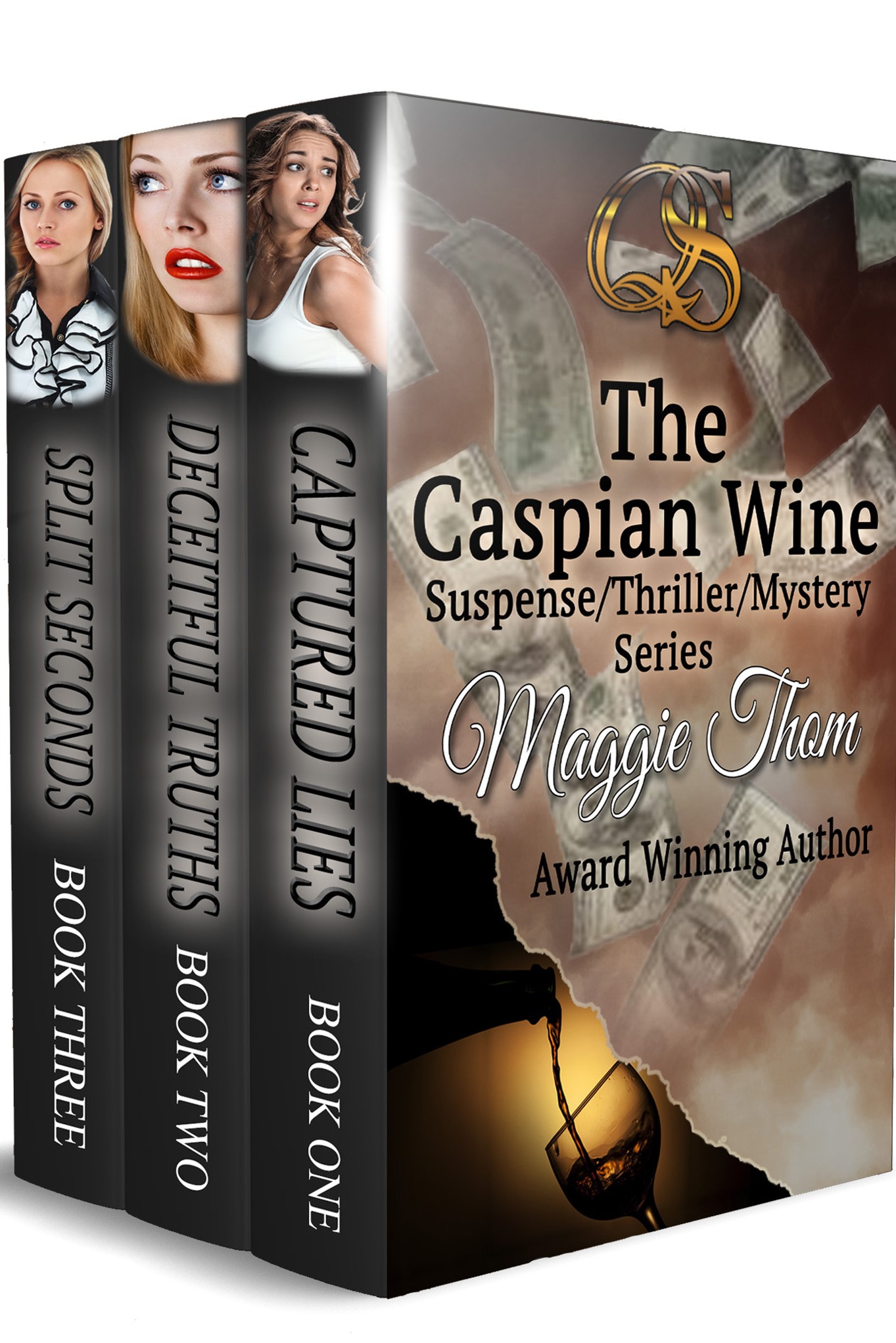 (three books in one)

Her life was a lie! She was kidnapped not once but twice and now someone wants her dead. Can she untangle 30 years of secrets, lies and deceit to discover her true identity?

She’s lost a week of her life but she doesn’t know who’s behind it. Now, though she is desperate to hide the secret that someone will kill for.

Seeing her twin for the first time in 28 years is difficult. But then playing her twin to take on organized crime … just might be deadly.

Available in kindle or epub (for every other ebook reader).

“… Maggie Thom has done a remarkable job bringing the characters to life, and creating scenes that will have your heart racing while you are glued to each and every page! …”

She was kidnapped not once but twice and now someone wants her dead because of it….

Bailey knew her upbringing wasn’t normal but she’s worked hard to stabilize her life. At 29, she finally has a good business, a stable home; her life is miles from that of her childhood. Then suddenly her mother dies, leaving a gaping hole and a discovery that they may not even be related. If Guy, the private investigator is to be believed, her life is a lie. Using the skills she learned on the streets, Bailey travels back through a sketchy and dangerous past, to find answers. Dodging bullets, staying ahead of those who want her dead and convincing Guy she can do it alone, are making it difficult to discover not only the secrets of her mother’s past but that of a family claiming she is theirs.

Everyone seems to have a story… but who’s telling the truth? And who wants her dead? Is Guy part of the solution? Or part of the problem? To discover the facts, she’ll have to untangle a web of deceit, lies, and secrets, dating back over thirty years.

But can she do it in time…

“Questions grow and so does the pace of this excellent story… I highly recommend it.”
Readers’ Favorite

“This is a story that when you start to read it you don’t want to put it down until you finish it.” Cindy’s Reviews

(ask them to order it in)

He created a legacy that no one could imagine…

Tarin has lost a week of her life. She doesn’t know what happened but not long after she returns to work she is suspended from her job. Confused and pregnant, she quits and agrees to marry Stephen, only to be thrown into a whole new nightmare. Desperate, she grabs her son and moves across the country to get away from her abusive husband and to avoid her unforgiving father. Thrilled at getting the job at Knights Associates, where she’ll help them solve cyber crimes but also be able to use their connections and resources to find her own answers. Who stole a week of her life? And will they return to steal the secret she is now protecting?

Graham and his partner Guy, can’t keep up with the demand. They are being flooded with requests at Knights Associates, where they offer a combined service of private investigator and that of solving cyber crimes. It appears that someone wants to get their attention as not only have they been hacked but Guy’s family business, Caspian Winery, seems to be under attack as well. Hiring an assistant seems to be the answer but when Graham discovers she’s been accessing their high-security accounts, he realizes the cause of their predicament might be closer then he thought. Is there new assistant behind the problems they’re having? If she’s so innocent why does someone want to abduct her?

Tarin and Graham discover that although they don’t trust each other, they are forced to work together to solve several seemingly unrelated crimes that may lead to one disastrous conclusion. Can they figure it all out before Tarin’s nightmare plays out? An eighty year old woman pays with her life? Or before Tarin learns a truth that may seal her fate and be the one secret that will keep her and Graham apart as neither one of them may be able to forgive or forget…

“…Intriguing story that is a cat and mouse chase until the end. I liked that Tarin has had enough and does what she thinks is best for her son. There is so much to this story as it unravels, you are going to be on the edge of your seat from the very first page…”
Emily Heisler

“…the story is very original and if filled with twist, turns and secrets. Just when I thought I had it figured out, a new turn or secret would pop up and have me at the edge of my seat.” Sherri Wilkinson 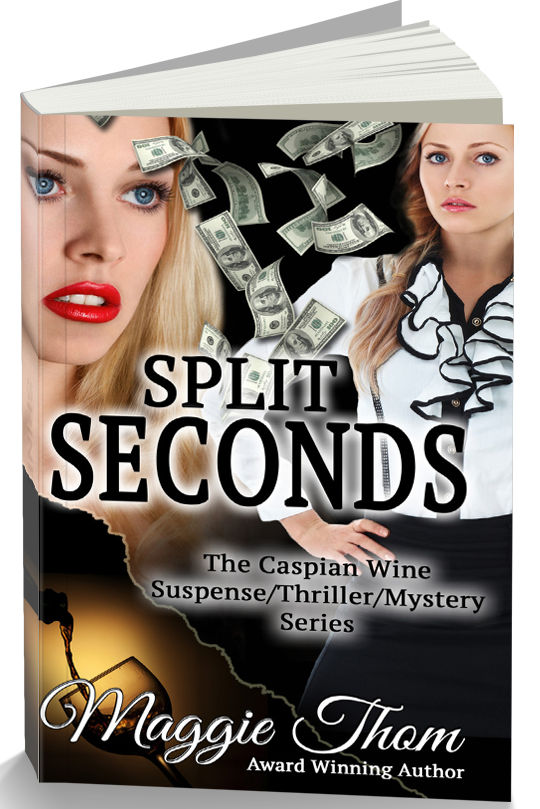 Twins… separated as toddlers, reunited as adults… and now they’re switching places in a dangerous game to take on organized crime.

Her sister is alive! Excited to discover her twin didn’t die as a toddler, Tijan can’t wait to meet her other half. But why hasn’t her only sibling reached out in almost thirty years?

Although the reunion is joyous, not everyone is excited to discover there are two of them. Using it to her advantage, Tijan is determined to take down the one man responsible for it all… her father. There are however, others who also want to destroy him and anyone who gets in their path. The secrets and lies that have kept the twins apart, soon unravel but with deadly consequences.

“…you’d better hang onto your seat because you’re in for more twists and turns than a world-class roller coaster...” Multi-Award Winning Author P.M. Terrell

“…The main characters are twins Tarin and Tijan, whom author Maggie Thom paints as complex, strong women who are quite different from one another…” Christy B

“…The action in the story was breathtaking… it was excellent!” S. Ingram

“…Secrets, lies and plenty of twists and turns make this a book you just can’t put down...” Mrs. Nicholls

Order it in to your local libray or bookstore 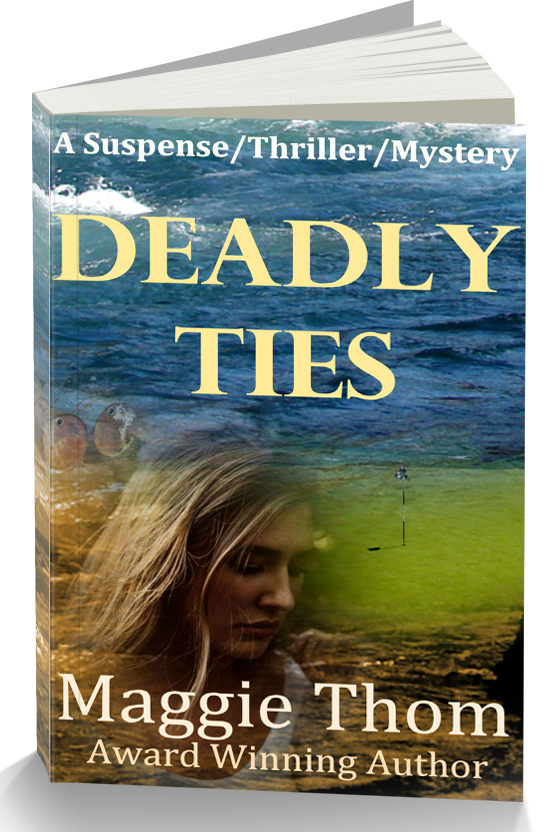 “…Maggie Thom is one of the best suspense writers in today’s fiction. Highly recommended…” Tom Johnson

his tale is a slice of that reality in a fictionalized version that will keep you riveted to every word, every page as Maggie Thom weaves a brilliant cloth of the many colors of deceit. 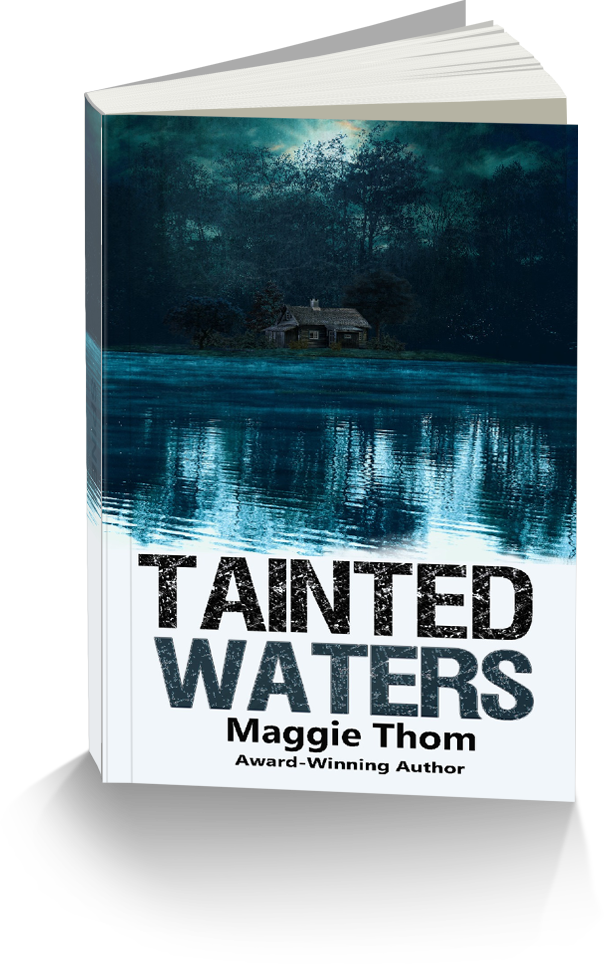 Frustrated at being fired from her latest job and overwhelmed by her consolatory family, Sam decides to move to the family’s cabin at the lake. A place she hasn’t been since her dad committed suicide there twenty years before. Or did he?

Snooping is something she’s good at but someone seems to be taking offence to her looking too closely, at what has been happening at the lake. What she discovers is shocking. Now she must uncover what’s real and what’s not. All that she learned growing up, may be false. Keegan, who has recently moved to the area, to finish his latest book is also trying to find out if his grandfather, who’d passed away ten years before, died of natural causes or was murdered? The descendants of the four families, who own the land around the lagoon, are dying off.

Since Sam and Keegan are the only ones questioning the deaths, they find themselves working together to seek the truth. Are people being murdered? Who would benefit from their deaths? Why would there be barricades and armed guards at the north end of the lake? To stay alive, Sam and Keegan must find the answers and convince others, before more people are killed… including them.

“I love a good mystery thriller. Each time I thought I had it figured out, I was way off, and back to the drawing board I’d go…” Laura Thomas

“I LOVED this book! It was fast paced and had me gripped from the start….. And talk about twists! Just when I thought I knew where this story was leading…… Bang!….. Plot twist!…”
Orchard Book Club

“… Exciting story, loved the beginning introduction to Sam. She is a firecracker and had me chuckling… Another wonderful read from Maggie Thom…” Musing from an Addicted Reader