E-book of the year title for local page turner 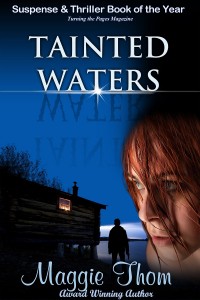 She’s only released two e-books so far, but one local author is already gaining plenty of kudos for her work.

The magazine took anonymous nominations for any e-book published in 2013 and had voting run for three weeks at the end of December and announced winnings shortly after the new year.

“It’s been very cool,” gushed Thom. “I’ve had people from all over on Facebook, Twitter, Google+, my website, all saying things like ‘oh my gosh, I love this book’ and ‘it was so great.’”

The online and social media reaction has been overwhelmingly positive for Tainted Waters and Thom’s debut novel, Captured Lies. On Goodreads, a social media site dedicated to readers, library cataloging, and book recommendations, the e-books have done very well, earning ratings of 4.28 and 4.30 stars out of five respectively.

The nod from Turning the Pages is Thom’s first award for her creative efforts and puts her e-book in the spotlight with titles from around the world.

“The winners were from Canada, Australia, and England,” said Thom, adding that there were

“The lady that started the magazine is an dependant writer, too, and the magazine has readers from around the world. But I just thought that it was so cool that it’s an international thing.”

Thom knows there are plenty of contests to enter her work in, but hasn’t really invested much time entering, something she plans to rectify.

“Absolutely, I want my work to be found world-wide,” she said. “They’ve both done pretty well so far and this [award] was a nice was to start the year.”

Tainted Waters is a tale full of corruption, drugs, lies and murder. It centres on a young woman, bouncing from job to job, trying to find her place in life while dealing with her father’s suicide. She seeks respite at her family’s cabin, but finds trouble instead.

It seems there’s no slowing down for local author Maggie Thom. Having just released her first ebook in October 2012, Thom is getting set to launch her second ebook, Tainted Waters, April 30.

Tainted Waters centers on protagonist Sam, a young woman who can’t seem to hold on to a job and decides to move to the family’s cabin at the lake, a place she hasn’t been since her dad committed suicide there twenty years before, or so she thought. She begins investigating his death and befriends another lake-goer, Keegan. Together they discover that the descendants of the four families who own the land around the lagoon are dying off. Since Sam and Keegan are the only ones questioning the deaths, they find themselves working together to seek the truth.

“It’s a bit dark, but it’s got a happy ending,” laughed Thom. “All of my books have happy endings.” “I’ve always been fascinated by people who have cabins and go to live their weekends out at the lake,” said Thom, discussing her inspiration for the story and adding that she didn’t understand the appeal of leaving the city to go to a lake which would just be crowded with other city folk. Another source of inspiration came from an occasion on which Thom went camping out by a lake and noticed large transport trucks that frequented the area. A seed of an idea was planted in her mind and she began to play the “what if” game.

“What if the trucks were coming but … maybe for drugs or other clandestine things?” asked Thom. “And then there’s always that stuff in the news that you hear about drug rings, and it goes from there.” Following in the footsteps of her first novel, Tainted Waters is another mystery thriller, but Thom has found a way to not get bogged down by the genre or repeat herself in her work.

“I have a beta group of about six readers and the first comment that I got back from just about all of them is ‘this is very different from your other one,’” said Thom. “I wanted it to be different and to have a whole different flavour to it, so that was exciting.”

Thom hopes to be able to maintain that creativity in her next project, which will be a sequel to her first novel, Captured Lies. “It’s going to be called Deceitful Truths,” said Thom. “I’ve never really thought about doing a sequel. What I’ve found really difficult is carrying on from the first book to this.” “But I think that by focusing on the characters and who they are and their journey, that’s helped me to keep it fresh.” Thom aims to have her next book out before the end of the year. “I’m finding it’s about nine months (to write a novel),” said Thom. “As long as I can do it well and believable, then I’ll do that.”

Almost seven months since her first book, Captured Lies, was published online, Millet author Glenna Mageau is now celebrating her second book’s release.
Her new book, Tainted Waters, officially came out yesterday and is now available as an ebook on several popular websites, including Amazon, iTunes and Kobo.
Tainted Waters, is a murder-mystery that follows the story of the main character, Sam, who is frustrated after being fired from her latest job and is overwhelmed by her consolatory family. Sam then decides to move to the family’s cabin at the lake. A place she hasn’t been since her dad had committed suicide there twenty years before. Or did he? Snooping is something she’s good at but someone seems to be taking offense to her looking too closely at what has been happening at the lake.
With the success Mageau’s first book, Captured Lies, has found online, the local author is now looking forward to seeing how her second book fares.
“I (was) really excited about the book coming out,” she said in an interview with the Pipestone Flyer, prior to the book’s official launch. “But I’m nervous too because there has been such a positive reaction to Captured Lies, I’m worried is this going to be as good?”
While Tainted Waters is not a sequel to her first book, Mageau, who goes by the pen name, Maggie Thom, said that the genres are the same.
“It is very different from the first book. It is the same suspense style, but a very different story,” she said.
What many people might not realize is that Mageau is not only responsible for writing the books, but publishing and marketing as well.
She spends a lot of her time on social media, whether it be on Facebook, Twitter, or her own website, she is always meeting new people and attempting to get the word out about her books. But the author says she is careful about how much time she spends online in any given day.
“I worked as a manager for 24 years and it overtook my life. Now, I try to be really cautious and keep it to 8 a.m. to 4 p.m., when my family isn’t home. I’m really trying to keep it separate (from my home life) so I’ll start working first thing in the morning when no one is around,” she explained. “I work Monday to Friday like any work day. “Funny, before this I wasn’t huge on social media, but when you do something like this, you realize how huge of a resource it can be,” she added. “It’s been a cool journey. I’ve met a lot of great people and other authors.”
Mageau has her own blog that she updates regularly. Last winter, as a way to promote her first book, Mageau went on a “blog tour” guest writing on several other people’s blogs.
“I think the blog tour was a great idea,” she said. “I think it made a big difference.”
For promotion of her second novel, Mageau has hired a street team to work with her on creating hype and awareness of her works of fiction.
“It’s something new I’m trying…I’m really impressed with the team I’ve got.”
So what is next for the author? Mageau has begun work on the sequel to Captured Lies and hopes to have that book out later this fall.