Suspense/Thriller/ Mystery Series "Oh, this series is so exciting with many thrills, chills, characters you will adore and hate with a passion!..."
;

The page you requested could not be found. Try refining your search, or use the navigation above to locate the post. 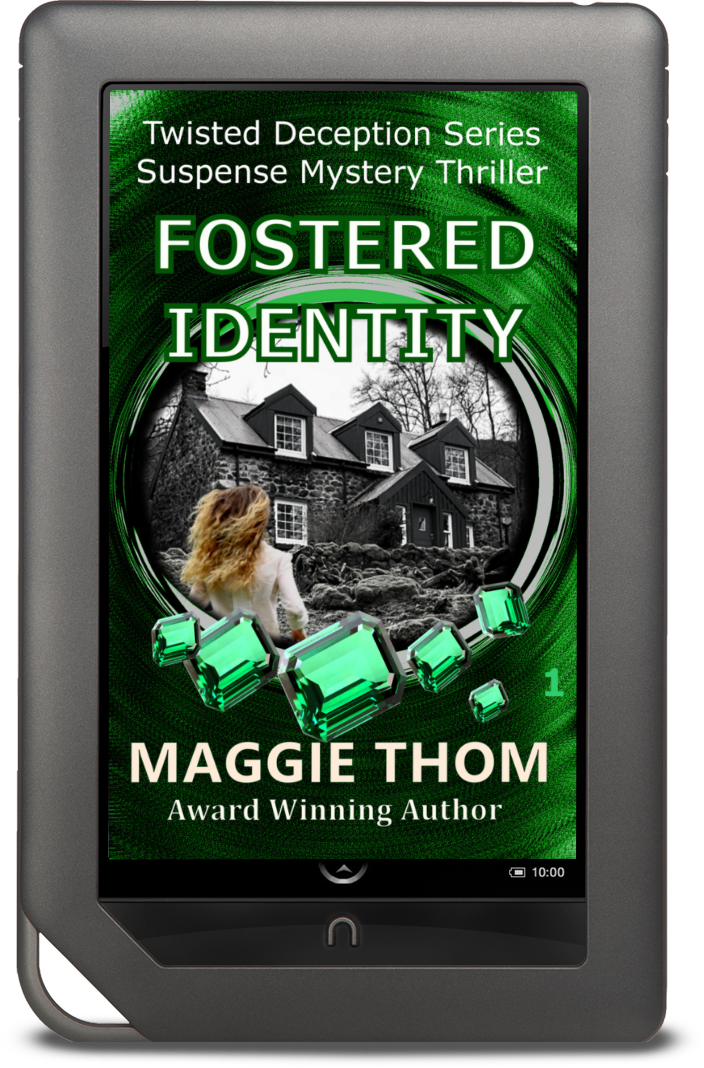 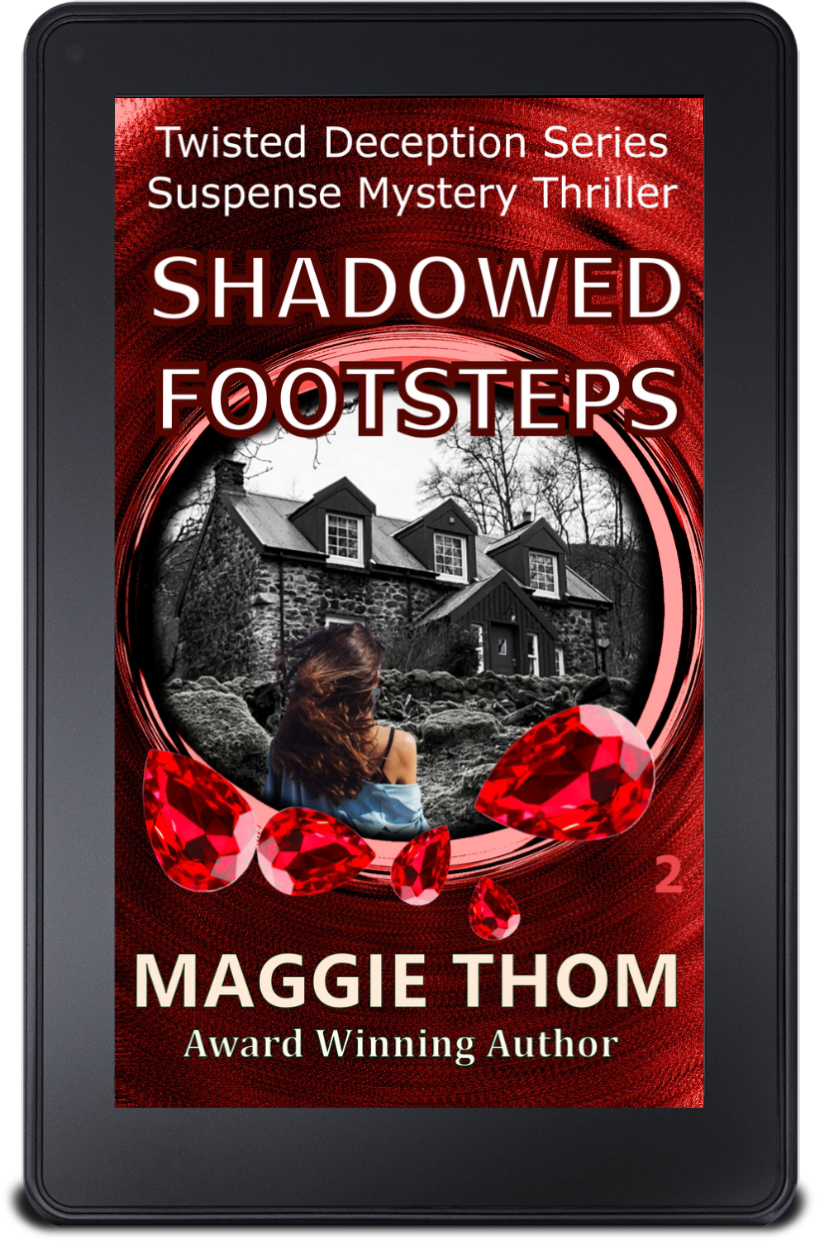 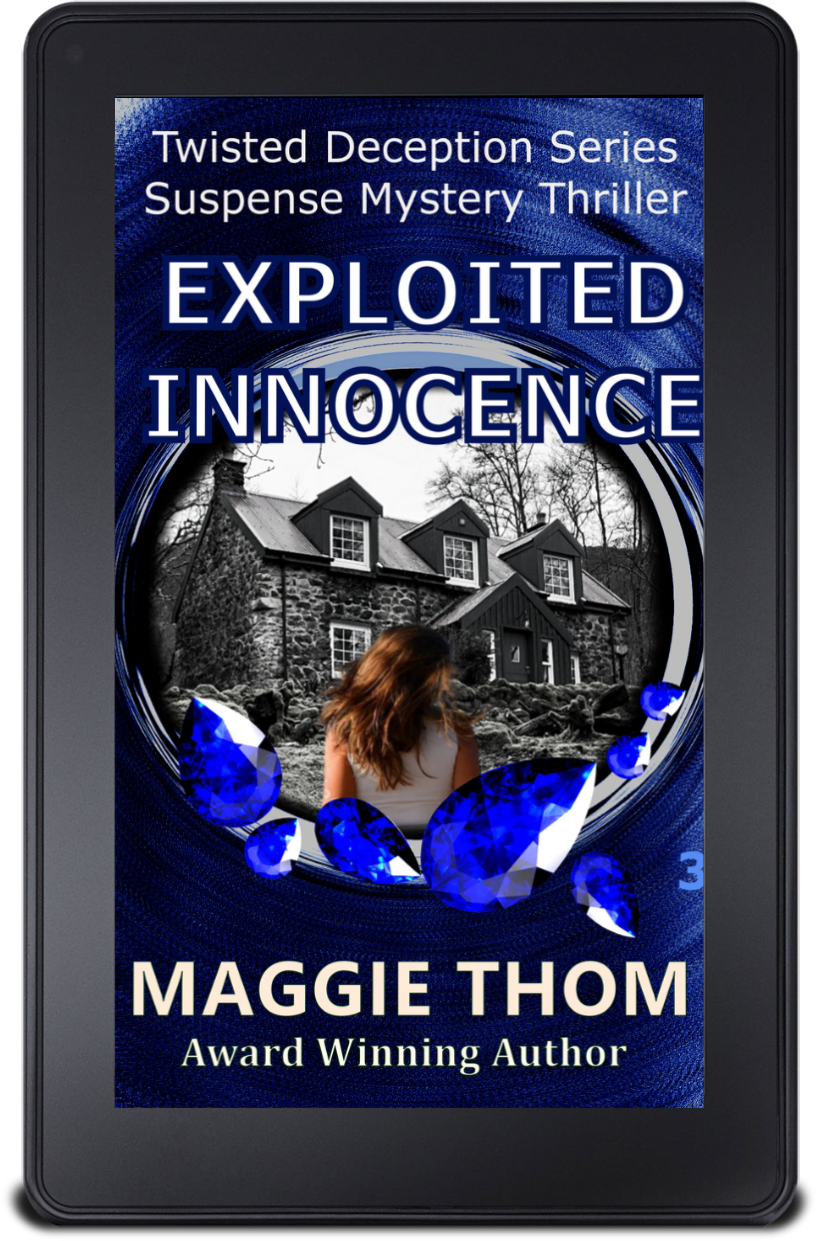 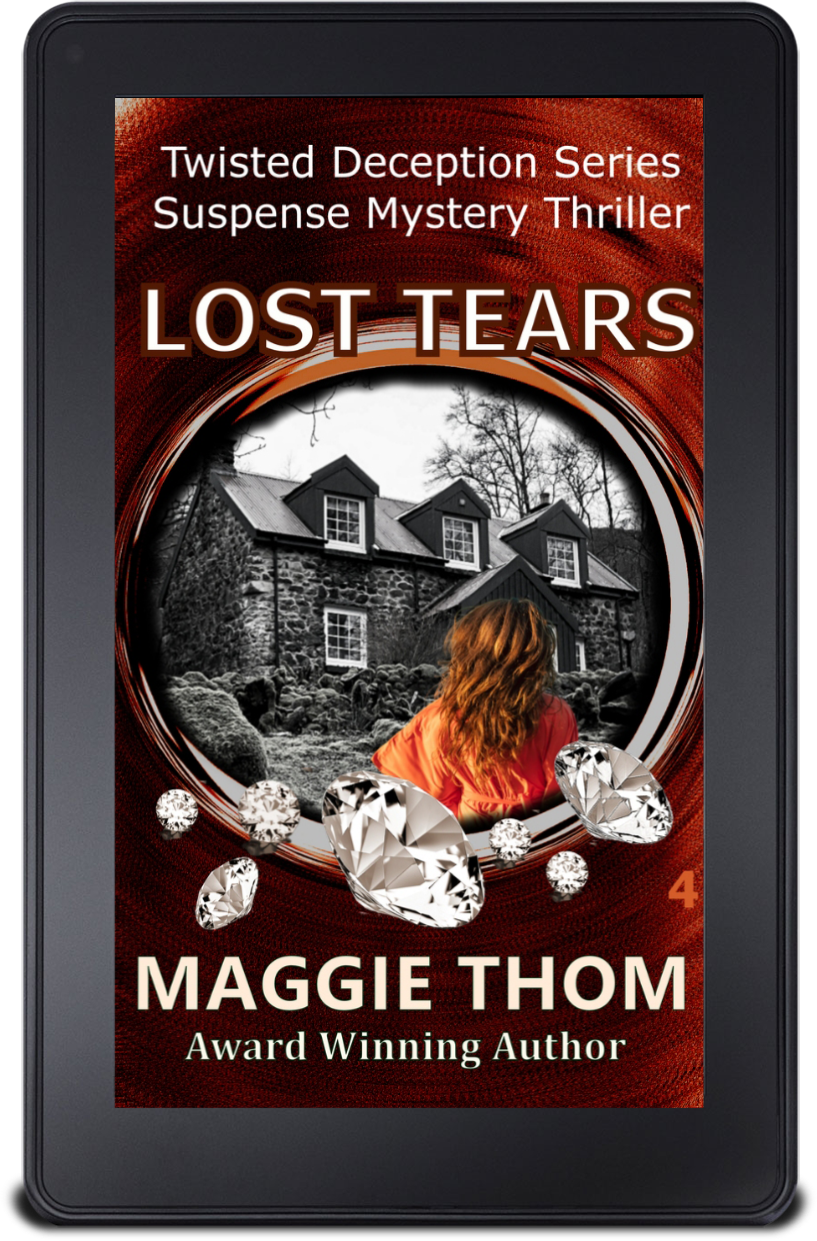 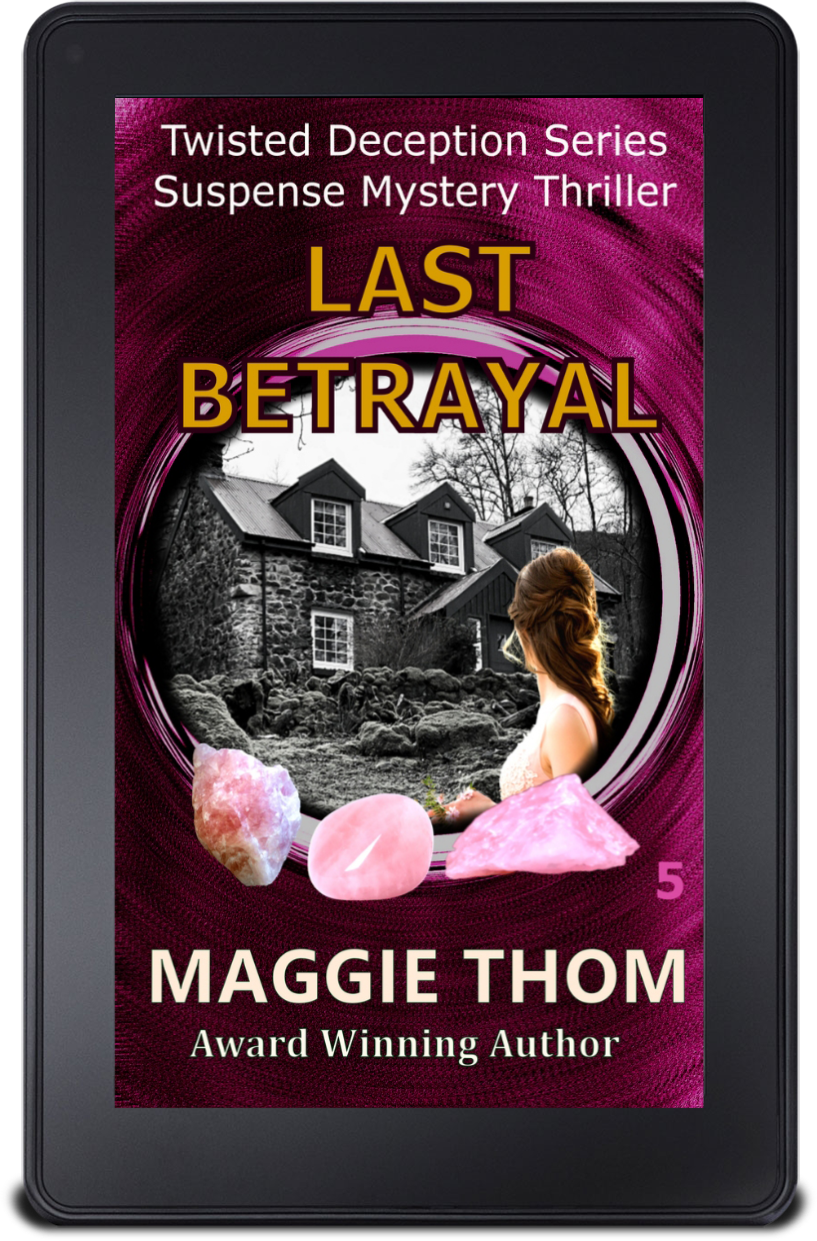 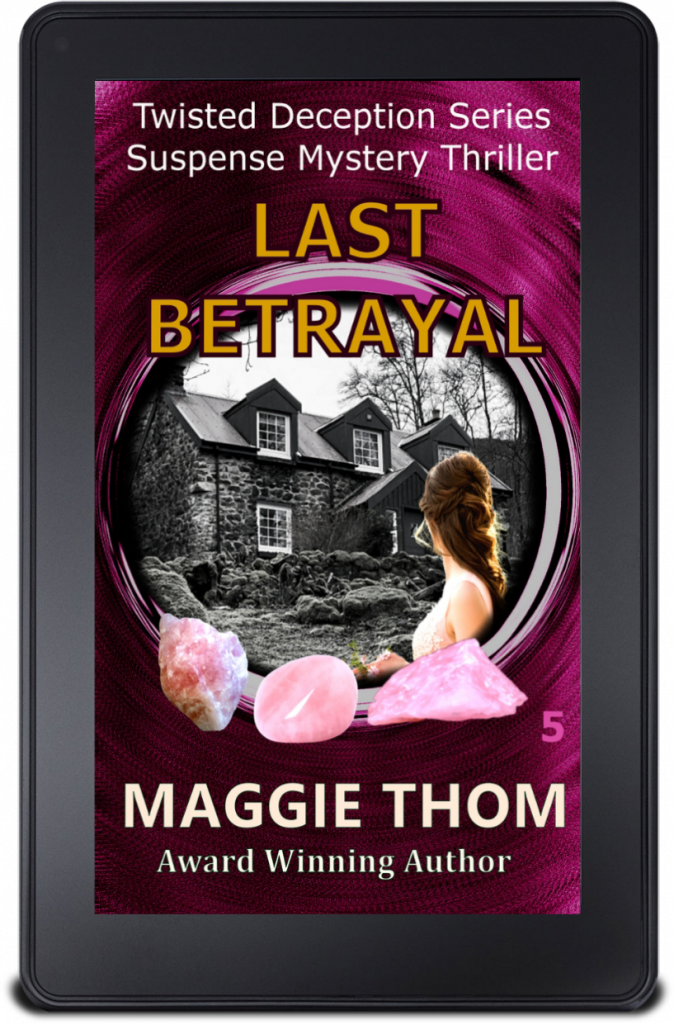 Get your copy today.

The one secret she did not know… changes everything.

On her deathbed, Addison’s grandmother tries to tell Addison something important. But all she has done is left a lot of ominous, unanswered questions. In her Will, she has asked Addison to take over the farm and insists she resolve the conflict of the past. Confused and unsure what to do with the little information she has, her mom then drops a bombshell about who she is and where she grew up. And she has jewels worth millions. Determined to right some old wrongs, Addison is out to change a past that is looming ever closer.

Mitch, burned out from being a street counselor for the homeless, agrees to help his buddy out by doing some security work. For both sides – the good and the bad. Playing a dangerous game of cat and mouse, with a man pushed to the edge, Mitch knows that if he doesn’t succeed, more people might die. Even Addison whom he has been tasked with keeping an eye out for.

Addison is not happy to have a babysitter but soon learns that she can use Mitch to help her. He knows things she doesn’t.

Can Addison bring to light the horrors of her grandmother’s and mother’s past and ensure justice is served? Or will she pay the ultimate price when she discovers who is truly behind it all?

The past can never truly go away.

Deborah grew up in a Foster Home run by Mrs. Stephanos. Now, thirty-five years later, the jewelry from her past has been delivered to all the foster sisters. She is playing with fire but wants to draw out the person responsible for all of their terror.

Last Betrayal is book 5 and the final in The Twisted Deception Series. All books in the series have standalone stories. But the story running in the background, the story that connects all the books, will keep you reading the series. Who is behind sending out the gems and what is their end game? An engaging thriller mystery with some interesting twists. Enjoy! 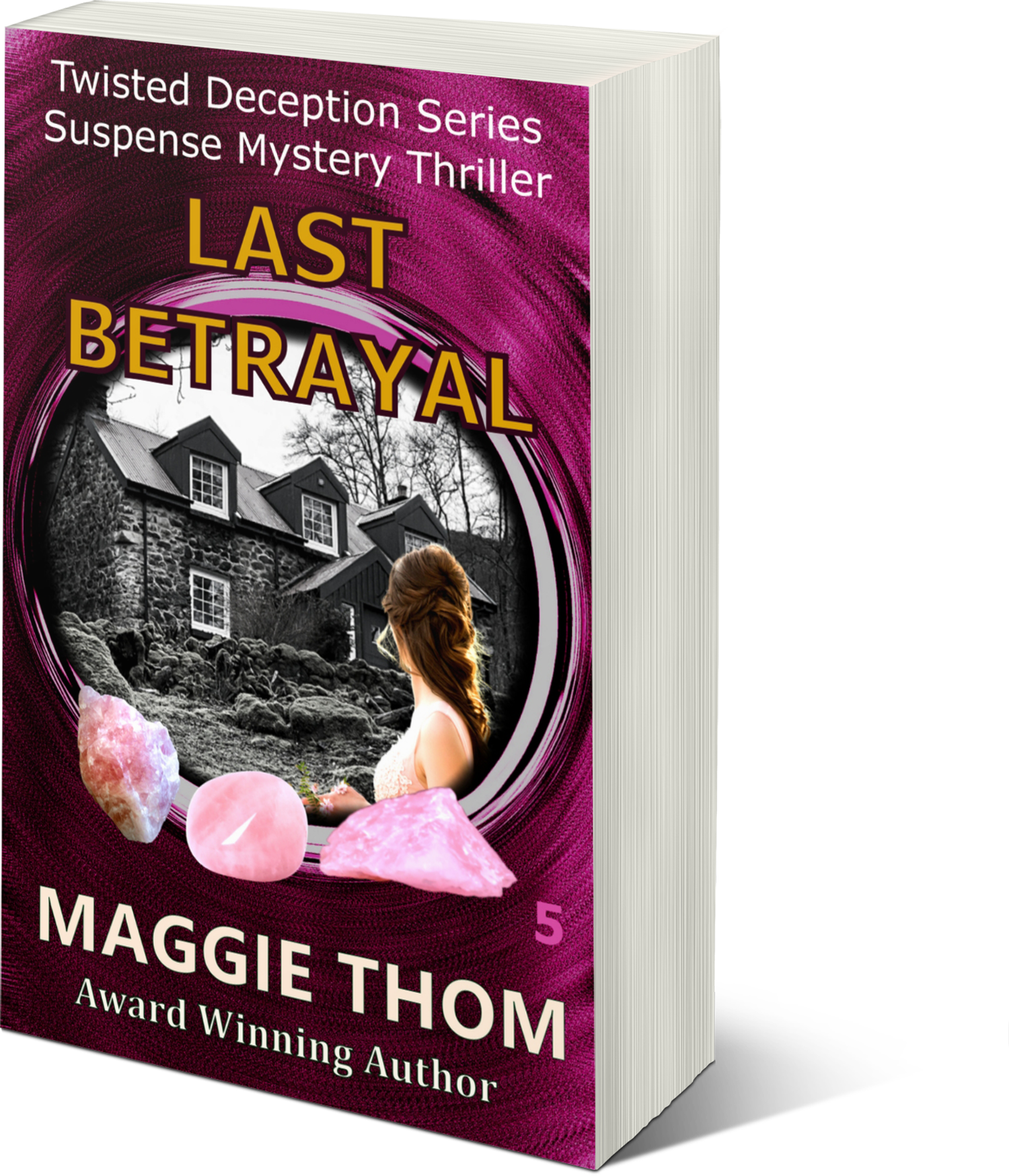 "... Wow. Such a good book. A good series. Everything tied up but with twists I didn't see coming..." HDGert

Add it to your TBR 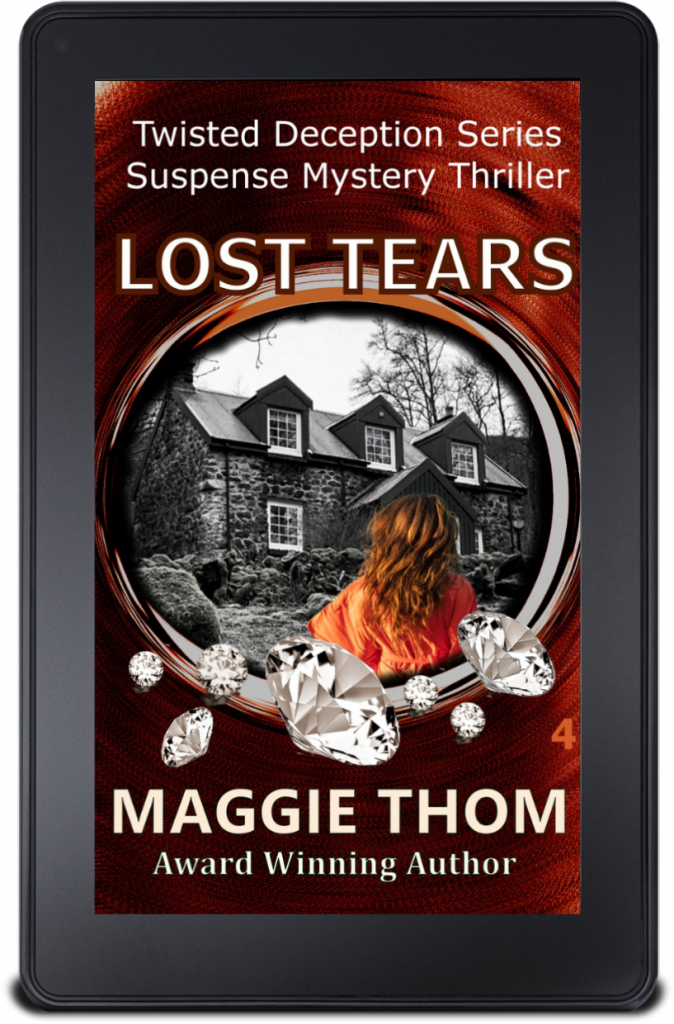 Dayna comes home under protest. If her aunt hadn’t guilted her, she never would have come to see her ill mother. Their relationship has never been good. At her father’s request, Dayna agrees to search into her mom’s past. A past that is nothing like she imagined—religious zealots, a dead girl, and on her own at age sixteen. They help to give a clearer picture as to why her mom might have chosen the bottle but it doesn’t tell her who the people are or why someone is still trying to hide a forty-year-old death.

Tanner, an undercover police officer, has been asked, off the books, to do some sleuthing for stolen treasures. Walking the fine line of doing what he was trained to do, and keeping it legal, is keeping him on his toes and it turns out running for his life. What he has gotten involved in is way bigger than he imagined.

Dayna meets Tanner in the most unlikely ways but it soon comes to light that although they are working on different cases, their situations are very much connected. Working together, they soon find that trying to do right by a dead girl, dodging bullets, and solve who is behind it all, are keeping them on the run.

Can they identify the girl? And her killer, before he succeeds again?

Lost Tears is book 4 in The Twisted Deception Suspense Thriller Mystery Series. All books in the series have standalone stories. But the story running in the background, the story that connects all the books, will keep you reading. Who is behind sending out the gems and what is their end game? An engaging thriller mystery with some interesting twists. Enjoy! 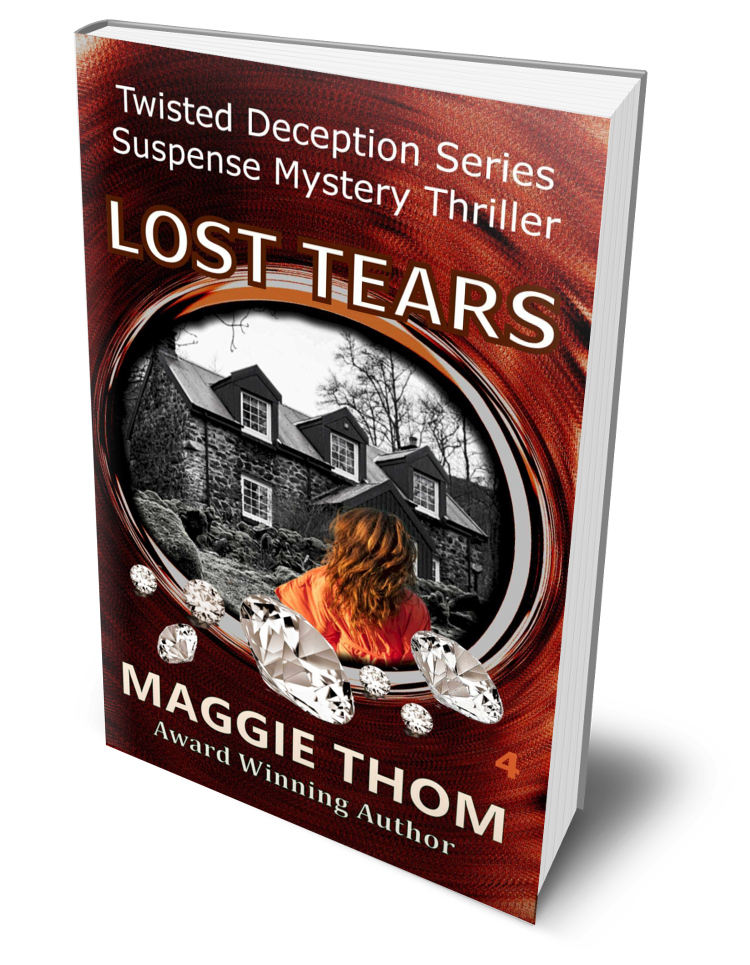 "...So much going on but I love how the story is unfolding. How this lends to the whole series... Can't wait for book 4..." Leah Mac

Add it to your TBR 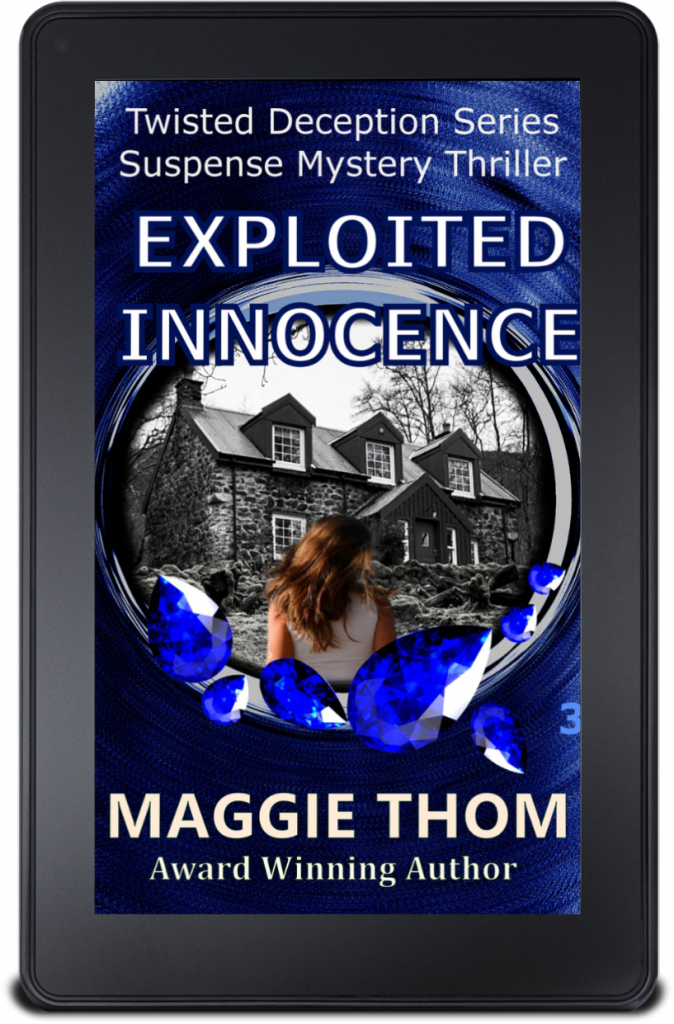 Taesa will do anything to save her mom from the Alzheimer’s disease that is destroying her.

Taesa has started a new job, one that she loves but is hoping will give her the connections she needs. Her boss, though, has a past that is coming back with a vengeance and is putting Taesa squarely in the middle of it. Being pulled in many directions, Taesa has a difficult decision to make – lose her mom to the disease or destroy someone else’s life in the hope she can save her mom’s?

Kal has been entrusted with his mom’s million-dollar jewelry. Ones that are linked to a mysterious and sketchy past. There has already been more than one attempt to steal  them. If that isn’t enough, Kal’s adopted teenage sister comes to stay with him and is determined to find her real mom and dad. With or without his help. She has run away once and she seems to know a lot about the jewelry and their real value. And will use them, if it will help her find her real parents.

Taesa and Kal are asked to work together. Kal’s mom and Taesa’s boss’s have a past that is intricately connected not only to each other but to that of the jewelry that is being sent to each of the foster sisters. Kal and Taesa start searching for answers. Their snooping puts them in the path of those wanting to hide their true identity and to keep the past in the past. These people also want that jewelry. They will do anything to get it. Lie. Kidnap. Even kill.

Exploited Innocence is book 3 in The Twisted Deception Suspense/Thriller/Mystery Series. A crime story that will take you on one heck of a journey to catch the bad guys and keep you guessing. Enjoy!

“So much going on but so good. Keep reading… Great series. Looking for book 4. Hint. Hint.” A. Doug

“I love this series. I’m starting to figure out who the bad guys are…” Sheryl K. 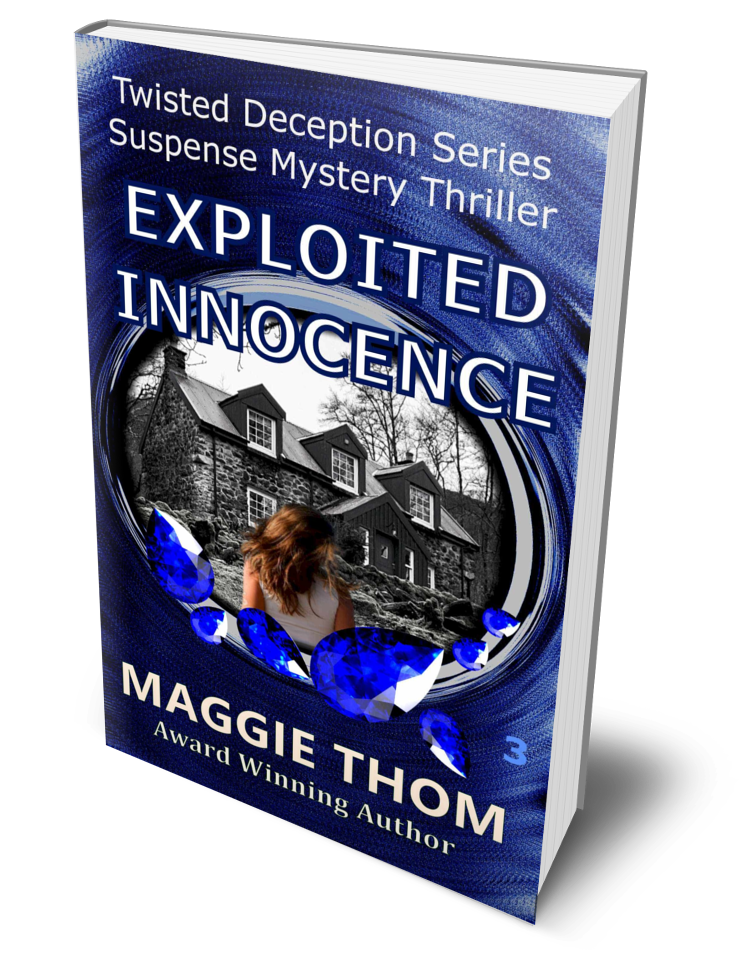 “…So much going on but I love how the story is unfolding. How this lends to the whole series… Can’t wait for book 4…” Leah Mac 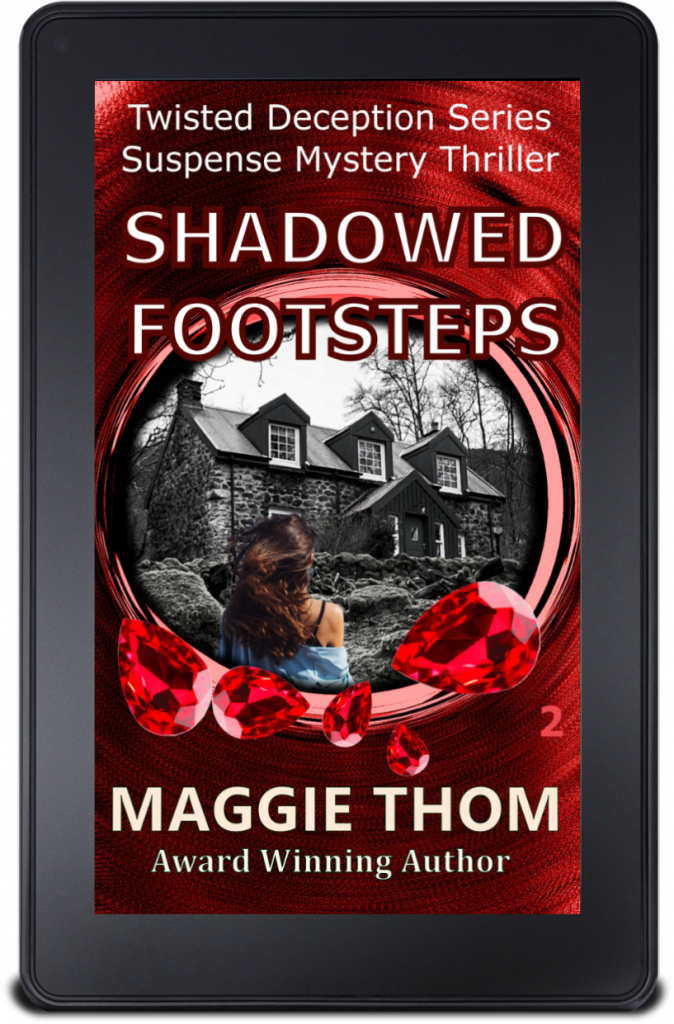 Lana has found her child’s father. She thinks. But he’s homeless. Or is he? Unsure what to do, she finds herself sneaking around, snooping, dressing up in disguise. Something she would never normally do. All to find answers. But then she discovers her mom is not only acting weird and secretive but she is being followed.

Jordie has been running and lying his whole life. But now he is using his skills for one thing, to take down the notorious Joe Brown. His father. But he can’t do it alone. The last attempt almost got him killed.

Lana forces Jordie to work with her, partly because she needs his investigative and connected skills but also she needs to know who he is. And if she should let him into his daughter’s life. Is he sane? Or is he crazy? Is he dangerous? To protect her daughter, she will take any risk.

Sheila grew up in a Foster Home run by Mrs. Stephanos. Now, thirty-five years later, the bauble that she used to play with as a child, has arrived at her home. And it is worth over a million dollars. She is the second of the foster sisters to receive her jewelry. But who is sending them out? And what is their end game?

“Maggie Thom, writes such engrossing stories. You won’t be disappointed…” Kal B.

“Loved it. Kept me flipping pages. Ooh, there is one character I strongly disliked…” SKC

“I read a lot. This book has stuck with me. I think about some of the characters, still. I definitely recommend it.” Shana T. 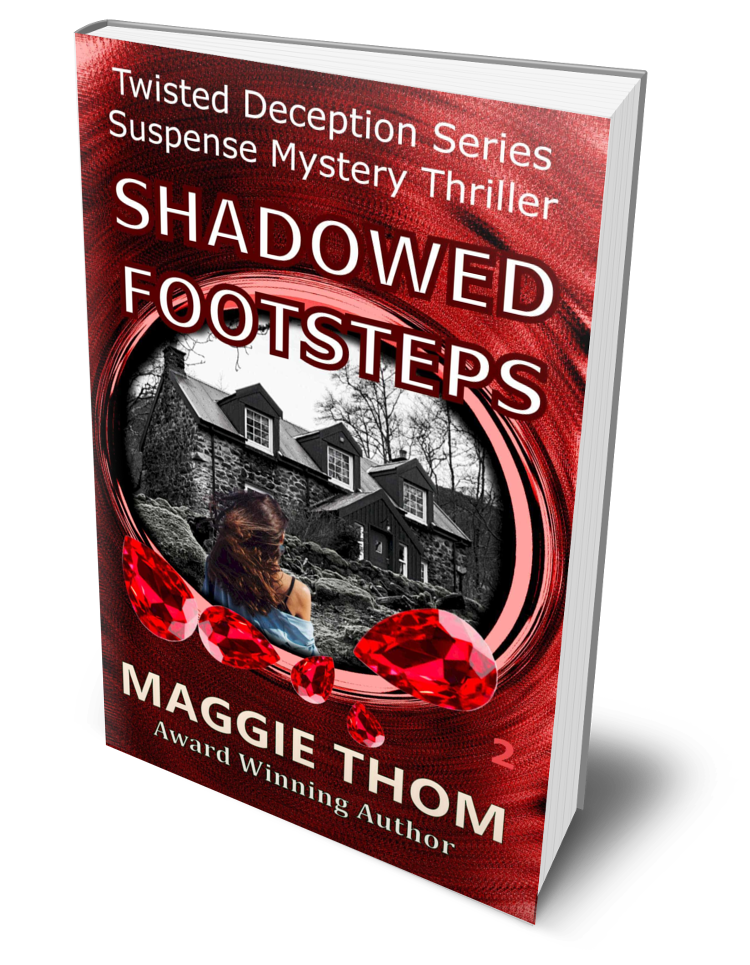 “Characters are very, very interesting, and much different from most other mystery novels… Very satisfying conclusion. Really enjoyed the story and hope to ready many more of them…” Betsy 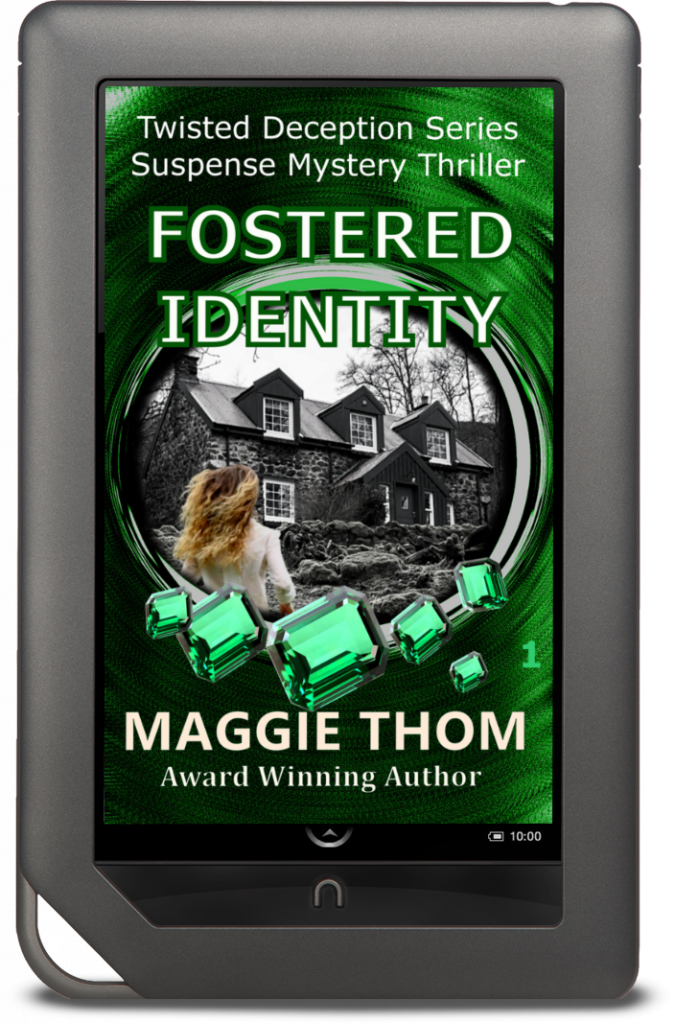 A fluke encounter gives Shyla a clue. Only she gets a lot more than she bargained for. Not only does she find her sister but she finds herself pulled into doing an impossible heist. And not just any heist but that of stealing her mom’s million dollar jewelry. Ones that recently arrived, with no explanation. 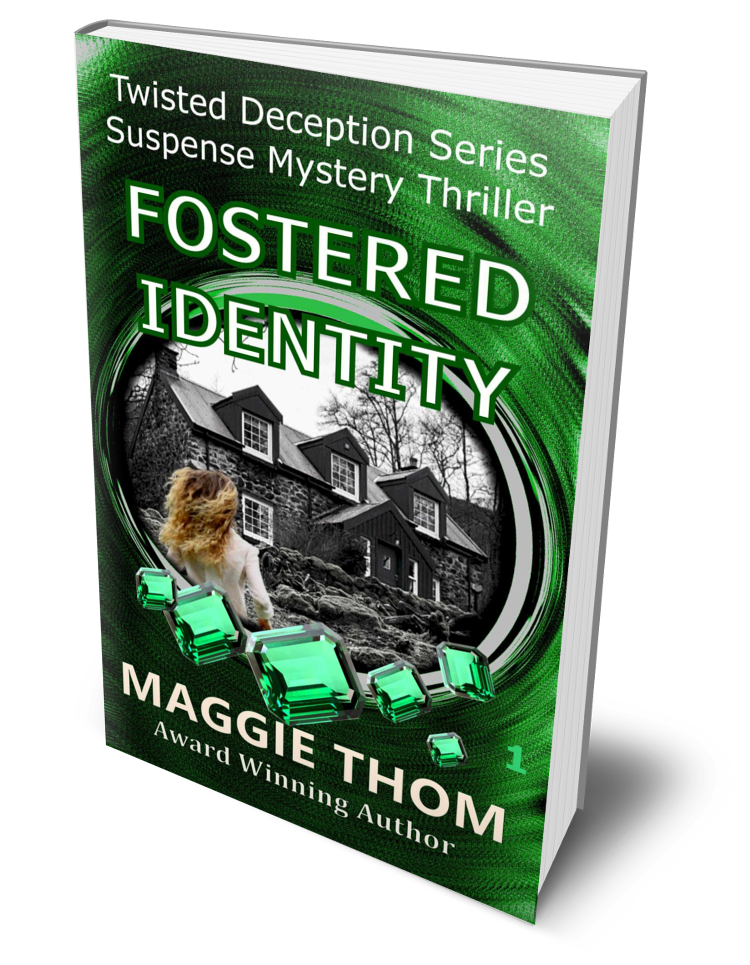 What others are saying about

“…fast-paced and kept me guessing. I like a mystery enveloped with family secrets and jewel thieves. I want more, and I want to know the secrets. I will be excited to read the second novel…”

“…Love the story.  Like always it draws me in and holds my attention…what is happening next.  Great JOB!”

“… Another brilliant book from this author. I have read all her books so far and would thoroughly recommend it.  Once I started reading it I could not put it down.…”