Journey Across Canada in Captured Lies – starting with Calgary

In Captured Lies you get to journey across Canada as the story progresses. So I thought I’d showcase some of the places in Canada that you get to visit as you read through my novel.

The story really starts out in Eastern Canada, in Ontario but you are soon on an airplane flying west. So I decided I’d start your journey in the west, Calgary, where Bailey’s mom lives and where a good part of the journey begins. Bailey has just lost her mom, so flies in from Victoria and stays at her mom’s house in south Calgary, while she deals with the lawyer, the funeral and discovering that she is being followed.

If you don’t know much about Calgary it is a beautiful city that has two rivers running through it – the Bow River and the Elbow River. Sadly in 2013 they were very destructive to the heart of Calgary, flooding and destroying so many homes and creating hardships for so many. (I wrote about some of what was happening, you can check out  more here: Alberta Floods)

Calgary started out as a fort in 1875. As you may know cattle were a big part of their industry in the early days – thus ‘cowtown’ was born and is something they still live with, even though it has a little over one million residents and no cows in sight except for the Calgary Stampede Days (started in 1912 but didn’t take off until 1923). In 1884 with 4,000 residents it was proclaimed a city. (to read more: Calgary History) 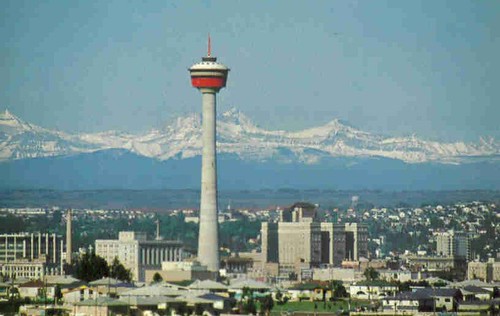 As you can see Calgary has changed a lot. The Calgary Tower is pretty much hidden. A part of the Captured Lies story actually takes place mostly in south Calgary, Shawnessy area, which didn’t exist thirty years ago. I couldn’t find any aerial photos to show you though.

Isn’t the change in downtown Calgary amazing? it is truly a beautiful city with lots of diversity and lots to do: with a ski hill in the northwest – which was part of the Olympics held in Calgary in 1988; canoeing, kayaking down the rivers; hiking paths; golf courses; and tons of indoor attractions. Can you tell I prefer the outdoors? 🙂

So in Captured Lies, while in Calgary, Bailey meets Guy who tells her she’s not who she thinks she is. Not sure she believes him, although he has given her some proof, she decides to do some snooping on her own. From a message her deceased mother leaves her, Bailey goes to her mom’s lawyer’s house to ask some questions. He is good at evading the answers but she does pretty good at stealing his secrets that are kept on a USB.

Since someone is trying to kill her, she decides to follow a secret code her mom left her, to try to find answers. She is now off to northern Alberta. She’s not sure where but heads to Jasper.

So next we’ll travel to Jasper.

If you’ve missed any of the Journey Across Canada so far, click on one of the links below: