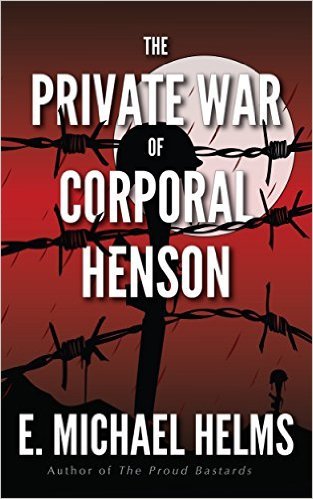 Now a new war begins—against Post Traumatic Stress Disorder. In a series of gut-wrenching sessions, Nathan faces the ghosts of his past and shares the struggles of others as they confront and relive horrors and dark secrets kept locked inside.

There’s Vic Guerino, a former Army helicopter pilot trying to adjust to the boredom of a grounded life, Dan “Doc” Matthews, wrestling with addiction brought home from the battlefields of Vietnam, and Rene Boudreaux, the loner who withdraws from society with paranoia ruling his every waking moment.

Nathan must conquer the demons of PTSD to win peace in his life, but it’s a harrowing rollercoaster ride through the valley of healing. The path is strewn with heartbreak and humor, hope and despair and love lost and regained.

This is the comeback story of a heroic young man who saw it all, lived through it, and ultimately emerged from the shadows of war.

Review of The Private War of Corporal Henson by E. Michael Helms

I wanted to introduce you to a new author to me, E. Michael Helms. I just finished reading his novel – The Private War of Corporal Henson. I definitely recommend reading it.

This is a gut-wrenching account of men’s memory of the Vietnam War and all they went through and how difficult it has been to step back into their old world. This is about a group of five men who’s lives are a mess. They discuss their issues and see if they can get their lives back on track. Each handles it very differently.

This is about the truth about war, the ugliness of war that not only occurs while its happening but its long last effects. Its an up close look at what it does to people for years after the war is over as they try to learn to cope in the ‘real’ world.

This was well researched, it was like being their with these men as they recounted their missions and horrors of what they saw. It was very interesting and very sad at the same time but there was hope that there would be change. Toughest lesson – not everyone can be saved.

I am doing an interview with Michael, next week on Tuesday, March 8th on my blog. He is a talented author of many novels. Be sure to check in and learn more about this author and about his new release.